Using webdav from Mac finder deletes ALL files and folders

Using webdav from Mac finder deletes ALL files and folders

I've encountered a rather odd issue that has me stumped so I'm after some help. I am currently evalauating ACS community 7.1.0 running using docker-compose. I have not applied any extensions and the product is running out of the box. There are several sites, each with various folders and other content that I have setup for testing.

In testing webdav today I connected to my server from Finder on my mac using my admin account e.g. http://hostname:8080/alfresco/webdav

All good so far. I can browse the sites and document librairies, open files etc. I then copy a file from my local machine to one of the folders in a document library and receive the message "A newer item named “013.pdf” already exists in this location. Do you want to replace it with the older one you’re moving?" I select Replace. Strange behaviour given the file does not already exist.

After a short wait (2-3 seconds) Finder presents me with the message "The operation could not be completed because some items had to be skipped ..........". I select Ok and Finder takes me back to the webdav root where I see three folders: Data Dictionary, IMAP Home, Sites. The Site folders are still there but ALL files and folders have been deleted from within them - the LOT!

The deleted files and folders are in the Trashcan for the admin user. I'm able to recover about 30% with most of them presenting with an error "Failed to recover .....".

The Alfresco log doesn't show much, apart from a bunch of exceptions where attempts to delete all the Sites was also attempted but failed with error messages similar to: "11160658 site deletion is not allowed. Attempted to delete workspace://SpacesStore/c8283b3f...."

So, I'm in a bit of a pickle. It's very concerning that such a catostrophic failure could occur and thankfully it's only test data. It's also concerning why I can't recover most of the content.

I'll also note that I can reproduce this every time with the sequence of actions noted above. I have not tried the same using a Windows machine but I will do that shortly.

Hoping somone can assist or provide a vector for me to investigate. Thank you.

1. Copy new file using Finder. 013.pdf did NOT exist prior to copying.

3. Files and folders in trashcan after selecting ok in step 2. 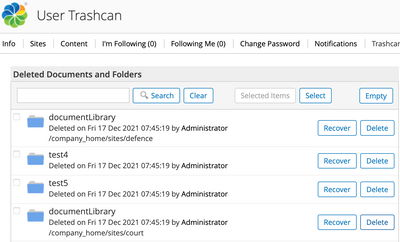 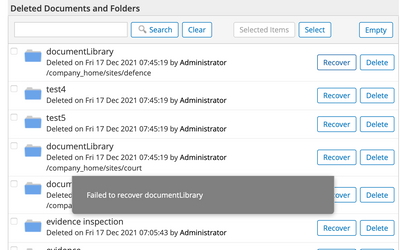